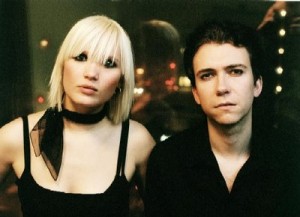 FOREWORD: The Raveonettes really took off internationally after ‘03s Chain Gang Of Love served notice on a major label. When ’05s controversially cleaned-up pop flop, Pretty In Black, came out, I was still intrigued and did a phoner with vocalist-bassist Sharin Foo. But at this early juncture, the cordial Dane duo had received only underground exposure in America. That changed a bit with ‘08s amped-up minimalist retreat, Lust Lust Lust, which recaptured all the dusty excitement of ’02 debut, Whip It On. This article originally appeared in Aquarian Weekly.

During the ‘90s, Danish sojourner Sune Rose Wagner traveled to the States searching for like-minded musicians, residing in Manhattan’s then-perilous Hell’s Kitchen before moving to Hollywood. Ironically, only when the guitarist-vocalist headed back to Denmark did he find his perfect future partner, beautiful waxen blonde vocalist-bassist Sharin Foo. Together, the pretty pair parlayed their expansive ‘60s-styled chops to Wagner’s marvelously archaic originals, forming the Raveonettes (its moniker combines Buddy Holly’s anthemic “Rave On” with the Ronettes effeminate second syllable) and releasing ‘02s impulsively primal 8-song debut, Whip It On, for sprouting local indie, Crunchy Frog Records.

“We’re both nostalgic hopeless romantics,” Foo informs. “And ‘60s music has always been an inspiration.”

On their introductory EP, the maturing Copenhagen-based duo bleed ‘80s-etched shoegazer distortion into nifty psychobilly (“Attack Of The Ghost Riders”), a spellbinding ‘sultry sexy’ serenade (“Veronica Fever”), and the frenetic fuzz-festered frolic “Do You Believe Her.” Siren guitar-bass detonation “Cops On Our Tail,” a shimmering hallucinogenic car chase escapade climaxing with its creamy billowing ‘fuck you’ sendoff, became the rancorous kinetic pillar.

Determinedly written as a post-Army Elvis salute, somber acoustic Pretty In Black opener “The Heavens” retains a heartfelt “Love Me Tender” ambiance perfectly underscored by crackling old vinyl static. Apropos sleigh bells and shakers fill out the vibrato guitar lullaby “Seductress Of Bums” and the blissful Ronnie Spector-modeled homage “Ode To L.A.” Interlocking surf and hot rod guitar slip into “You Really Got Me” interplay during psych-garage aphrodisiac “Love In A Trashcan.” Woo’s enticing moan haunts the staccato beatbox pulse consuming the cover of the Angels timeless girl group classic, “My Boyfriends Back.” And the extraterrestrial “Twilight” reinvests the Marketts unearthly “Out Of Limits” to keen effect.

Pretty In Black is quite an enchanting semi-departure from your initial two releases.

SHARIN: We have moved away from the minimalist approach of playing all the songs in the same key with the same three chords. But the fact that there’s no fuzz, noise, and distortion and it sounds more organic and bigger just happened naturally. We actually recorded many more songs. When we went in to do the demos, initially we didn’t have the gadgets (we’d normally utilize). The songs ended up being written with clean guitars that were twangy rockabilly sounding. We thought it was charming. “Seductress Of Bums” was inspired by early rock duets like “Some Velvet Morning” (Nancy Sinatra & Lee Hazelwood) and Mickey & Sylvia.

Then there’s the “Apache”-like echoed guitar drone of “Sleepwalking,” a bustling turnabout.

SHARIN: When we were done, we realized how quiet the album was – low tempos, mellow sections – so we decided we had to have an up tempo song so we went in and recorded “Sleepwalking.”

Well, the remake of the Angels “My Boyfriend’s Back” also brightens the mood.

SHARIN: We were asked to do that for a computer game, Zombie. So it came together in a strange way. The soundtrack is ‘50s-‘60s songs reinterpreted by new bands. Doing “My Boyfriend’s Back” was quite ironic since we worked really close with the guy who wrote the song. We thought it’d be fun to work with Richard (Gotteher) in the studio again. It turned out to be a charming pop song we couldn’t resist putting on the album.

How has Richard Gotteher’s production helped the Raveonettes achieve the desired studio sound for the last two releases?

SHARIN: We fooled around in a friends’ studio we borrowed in Denmark for the EP, then found Richard. I met him in Berlin at a news conference and we started chatting. I knew about his experiences with Blondie and Richard Hell & the Voidoids. We stayed in touch. So I sent him an album with the Raveonettes on it and he absolutely loved it. We now have a close friendship. He’s our supervisor and guide to how to navigate this strange music industry. He’s an amazing source of energy and has great stories from back in the day. He’s really old school. He’s not into seedy sexy lyrics. He’ll say, “Why don’t you sing ‘a kiss on the cheek’ instead of ‘I’ll stain your sheet.’” He’s very old fashioned, a great music lover with an amazing approach to giving us the confidence to do what we do. We had grown up in small Denmark countryside towns and didn’t know each other. I grew up with music. My father was a rock and roll guitarist. He brought me on local tours so I got exposed to a lot of Velvet Underground, Beatles, and the Sonics. But Sune had to discover music himself, growing up in a non-musical environment. We ended up meeting each other in the small Copenhagen music scene and wanted to do the same thing.

Did the White Stripes success as a two-piece convince you to go out as a duo instead of a fuller band?

SHARIN: No. Sune wrote some songs in ’99 while traveling the States. When we started out we didn’t know the White Stripes existed. When we found out, we thought, “Cool!” More groups popped up and suddenly there was a scene. We thought maybe there’ll be an audience for music like this. But when we play live now, we’re a five-piece.

Going back to Whip It On for a sec. Was the harrowing “Cops On Our Tail” based on a true encounter?

SHARIN: (wild laughter) We didn’t exactly experience that. But like all the songs on that EP, it’s got a cinematic quality we shoot for – like a suite. It’s part fiction, part autobiographical. It’s not like we were actually held up by the police.

Wouldn’t Copenhagen police be more lenient towards petty crimes than the ever-conservative US cops?

SHARIN: Yeah. But those songs were written in L.A. and New York. So they’re more inspired by pseudo-Americana.

Was Chain Gang Of Love inspired at all by ‘80s garage legends the Lyres, Chesterfield Kings, and the Nomads?

SHARIN: The main inspiration goes back to basic songwriters like Buddy Holly. And if you listen to our vocal harmonies, it’s very Everly Brothers. And of course, the whole girl group era and all the noise bands like Jesus & Mary Chain were inspiring. We just wanna write good vintage pop songs. We reference great film noir, Alfred Hitchcock, and B movies – all that. It’s pastiche with a bit of homage and some parody maybe. Obviously, I love the Ramones and punk too. It’s all the good stuff mashed together and brought up to date.