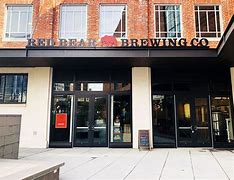 At this bustling industrial office hub (north of Massachusetts Avenue), RED BEAR BREWING CO. began operations. Inside a red brick neighborhood mall near Union Station and close to the elevated trains, Red Bear takes up a medium-sized corner spot down the street-level stairs.

Inside, the rustic cement-floored pub features 20-plus taps (proprietary beers plus seltzers and ciders) at the centrally located bar while the surrounding area offers wood and metal four-seaters and community tables plus board games for the kids. Kettled brew tanks are at the far right. The superb pub food menu and a host of upscale liquors back up the wholly reliable brew selections (of which, I will discover five well rounded and widely differentiated elixirs reviewed below).

At the partially covered outside patio, my wife and I (with dog Roscoe) consume five diverse homemade creations on a rainy Saturday in May ’22.