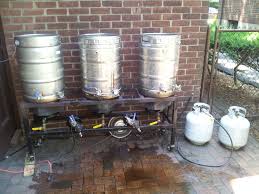 Like some mad scientist concocting strange brews for some secret society of local hipster geeks, Jersey home brewer Robert Olson could be found boiling and toiling with experimental elixirs at his suburban Ridgefield Park domicile on any given day. Presently employed as a consultant for a construction claims company, the hearty twenty-eight year old Bergen Catholic grad spends most of his ‘free time’ devising formulas for a diverse range of beers under bovine-sniffing moniker, Bolero Snort – one of New Jersey’s latest upstart breweries.

Working out of his modest garage, the wily wizard recently hooked up with fellow award winning zymurgist Andrew Maiorana on an adventurous journey through the wondrous world of brewing. Together, the now business partners produce a constant barrage of non-traditional, alternative-minded beer batches that take customary methodology to task, with the occasional stylistically brew tossed in.

Brew days didn’t always go as smoothly as they do now. “I made a mess of my parents kitchen with early batches,” Olson claims as he puts an India Pale Ale up for boil. “I had to bottle beers on my second date with my wife, Melanie. I had sanitized everything, but there was sweat running down my shirt. So the fact she stayed with me was impressive. She saw me at my worst.”

Unfortunately, when it came time to cap the beers, Melanie accidentally broke the capper. Now he had forty bottles of beer with no way to cap. So he simply hand-hammered on each top.

In April 2010, Olson began jotting down his own recipes. By May, he’d befriended Matt Steinberg of North Bergen’s New Jersey Beer Company. At the time, Matt was launching his brewery with a tasting at North Arlington’s prestigious beer joint, Copper Mine Pub.

“Matt was a celebrity to me and I was afraid to talk to him. What I think endeared him to me was I saved him from a conversation with some crazy chick,” Olson laughingly recalls. “Matt inspired me – and helped me realized that brewing beer could be more than just a hobby. I started building a brand instead of just winging it. Now I’m routine and practiced.”

As we settle in at the patio, Olson pours his initial flagship beer, There’s No Ryeing In Basebull (its wordy crybaby appellation stolen from Tom Hanks’ famous League Of Their Own character), one of Maiorana’s original creations. A summery soft-toned steppingstone for lighter thirsts, but yet still flavorable for the craft beer enthusiast. It’s a sessionable mainstreamer with a rye-spiced nicety, subtle orange-dried fig acridity, and earthen bottom Olson tagged “a casual sipper for boating or a day on the beach.”

Next up, the bustling brewer breaks out an abstruse peculiarity – a Mexican lager pairing mint and lime zest. Another keg-only pilot batch, we quaff the last remaining bottle he had saved of this capricious Fourth Of July celebrator labeled Cowabunga. Its fragrant cologne snip, setback lemony clove tingle and woody hop prickle dance on the tongue as Sambuca illusions reach fruition. Like all of Bolero Snort’s pilot batches, it’s not yet commercially available.

As church bells ring out at the top of the hour and a train whistles by in the distance, Olson dips into his first true collaboration with Maiorana. “The first time we brewed together was in March of 2011 and we really wanted to create something unique to mark the occasion.” Emulating a PB & J sandwich, Brown Bag Lunch Brown Ale places Concord grape-jellied Muscat wining below an increasingly pervasive walnut-shelled peanut butter mouthfeel.

A trial batch that Olson hopes to move into a seasonal offering, Bananas Foster-style hefeweizen, Scotty Goes Bullnanas, furnishes fig-dried plantain souring to brown-sugared rum-soaked oak. He admits getting proper carbonation and residual sugaring for fruit beers becomes an obstacle for most brewers as he sour mashes an original IPA. We then drift into his cask-like Black IPA, recently re-branded Blackhorn, where piney-sapped dried fruiting embraces dark chocolate-y caramel malts.

“The Black IPA was my first original recipe. We’ve pursued alternative ones to become our flagship beer, including today’s standard IPA, but we just kept coming back to it,” he claims as I relish in its amplified wood-charred grapefruit afterburner.

Maiorana decided early on to enroll in the American Brewer’s Guild program to provide Bolero Snort with the technical background needed to spread the upstart brewery into a full production microbrew facility. For now, Olson utilizes a plastic Gatorade cooler as a transition tank. But he also benefits from the backyard garden that provides hops, herbs and fruits for certain beers.

“A cuadrilla is a team of people helping the bullfighter. It’s sure to get people fired up,” the smiley-faced entrepreneur concludes.

For Groundhog Day 2012, I revisit Olson’s 100-year-old Victorian pad to see how the federal and state liquor licensing is going. Bolero Snort has been granted federal approval, the first step in marketing beer for sale, since outdated state laws forbid him from taking the beer off-premises even if he’s allowed to brew up to 200 gallons per year for personal consumption.

At 9 AM, Olson sets up the pilot rig while rolling the brewing equipment from inside the garage to the outside patio. He hopes to be selling beer commercially this Summer and may move his equipment to a local warehouse soon. Initially the beer will be contract brewed with Olson and Maiorana assisting on brew days and distributing Bolero Snort’s fare, but the goal is to maintain a self-run production facility by late 2013.

“One of the best thing about the brewing industry is the sense of community among craft people leading to fulfilling collaborations. Anytime two brewers get together, different techniques are discussed.”

As I make my way out, the sun’s shining on Olson’s fairly large frame. The future looks bright for Bolero Snort. And there’s plenty of beer geek insiders who already know they’re on the loose.