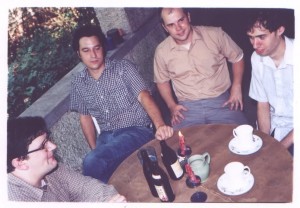 FOREWORD: The Rock-A-Teens were one of the finest ‘90s garage rock purveyors from the South, competing favorably against Detroit’s fertile retro throwbacks thanks to their fierce determination. A formative self-titled ’96 debut, ‘97s better Cry, and ‘98s Baby, A Little Rain Must Fall gave the Rock-A-Teens a firm club following across the US. But ‘99s Golden Time and ‘00s Sweet Bird Of Youth were pretty cool, too. It’s a shame they’ve since departed. I interviewed singer-guitarist Chris Lopez in ‘98 via phone. Never got to see ‘em play live, regrettably. This article originally appeared in Aquarian Weekly.

Based just outside Atlanta in Cabbagetown, Georgia, swampy reverb addicts, the Rock-A-Teens twist compelling dramatic tension out of pale ‘60s garage rock and reliably cryptic ‘50s rockabilly. Rather than worry about proper chord structures and muddled echo, this menacing trio retains a crude, raw sound that just gets better with each album. Taking their cool moniker from a one-hit-wonder from the ‘50s (whose claim to fame was the rollicking “Woo-Hoo”), singer-guitarist Chris Lopez, drummer Justin Hughes, and bassist Brandon Smith scruff up a dizzying array of material.

On their self-titled debut and sophomore set, Cry, the Rock-A-Teens sounded like they recorded each tune inside a tunnel, giving the beat-driven songs a faraway feel perfectly suited to their primitive style. But the newly assembled Baby, A Little Rain Must Fall, the microphones actually sound like they’re in the same room as the instruments.

Footstomping “Teen Muscle/Teen Hustle” leads into the thumpin’ “Don’t Destroy The Night” and “N.Y.By Helicopter” (a simple little no-fi ditty concocted from home tapes). The emotionally drenched “I Could’ve Just Died” and “Leave What’s Left Of Me” semi-counter the forward marching “Carla Anne” and the fast-paced charged-up “Ether Sunday.” And the dirge-y static-filled “Stardust 680 AM” sounds like a delectable leftover from one of the Rock-A-Teens first two albums. Producer David Barbe gives the songs better dynamic range but never intrudes on the bands’ roughhewn appeal.

Chris Lopez shared a few ideas with me over the phone from his front porch.

Have you lived in Cabbagetown, Georgia, your entire life? Is that where you first discovered your love for music?

CHRIS: No. I’ve only lived there half my life. I’ve lived all around and had a normal childhood. During my misspent youth, I listened to a lot of records in the basement. My older brother used to play drums when I was real young. There’d be tapes of the Beatles, Rolling Stones, and Neil Diamond lying around, but when I really got into music as a teen it was punk rock. The Ramones were one of the first non-basketball arena concerts I attended at age fifteen. Before that, I saw Ted Nugent and these Sha Na Na auto shows.

Would you consider the Roc-A-Teens a lo-fi band?

CHRIS: Our first album could be considered lo-fi, but not in the traditional Sebadoh style. It wasn’t four-track lo-fi because it was actually recorded in a big gymnasium. The second album, Cry, was as hi-fi as it could get. But it’s the organ and reverb that get people freaked out.

In an article, you mention the Rock-A-Teens have an ‘Orbisonic’ sound. I thought that was a rather profound observation.

CHRIS: It’s just that kind of Roy Orbison aesthetic. His hits outside “Oh, Pretty Woman” were massive ballads with strings, like “Crying” and “Only The Lonely.” Our slower numbers are like that – almost operatic and over-the-top.

Why do you love to soak your songs in loads of reverb?

CHRIS: Reverb is standard on most amplifiers. I have an old shitty Epiphone amp that I put the volume way up on. It gives me a very deep sound that’s hard to re-create live because it gets lost.

Where’d you come up with the depression-bound album title?

CHRIS: I think it’s from a record by Vern Gosdin, who’s known as the ‘Voice of Country Music.’ (Actually, I think they nixed it from Glenn Yarbrough’s ’65 hit, “Baby The Rain Must Fall”) It just had a goofball ring. I was gonna name it Cokes + Cakes + Stomach Aches, but that got shot down. This album has a little more pop to it. It’s just a natural progression on our old shit. But a friend of mine was taken aback by it and then couldn’t explain why. Actually, “Teen Muscle/ Teen Hustle” is a glam-rock song we hope will replace Gary Glitter’s “Rock And Roll Part 2″ at sporting events and make us lots of money. (laughter)

What did producer David Barbe’s experienced hand add to the new records’ sound?

CHRIS: Naturally he pressed buttons and turned knobs in his Athens studio, splitting time at the production board with Andy from Servitron. He offered suggestions and cheerleading. He played the fake Hawaiian guitar on “I Could’ve Just Died.”

What was that depressed morsel about?

CHRIS: Most of our stuff is black humor. “I Could’ve Just Died” is the story of a guy going to a wedding who drinks too much, makes a fool of himself, kicks himself in the ass, then falls down on the glass table. But that’s not something I’ve ever done.

How have the Rock-A-Teens improved since the first gigs in the early ‘90s?

CHRIS: We never thought we’d come this far. We never thought we’d make a record. There was this neighborhood honky tonk we’d play with other local bands. We just kept writing songs, making tapes we’d send around. We toured with Cat Power before our first album came out. We’d go to New York and exclusively play the Cooler on Monday nights. We played Brownies once, also.

The Rock-A-Teens transcend simple categorization, but I’d like to think there’s some garage-y ‘60s connection.

CHRIS: We’re our own little entity. We’re not like Olivia Tremor Control or Neutral Milk Hotel. We’re inadvertently creating our own niche. We don’t consider ourselves a garage band or strictly rockabilly. There’s a whole history book of music from 1900 forward that blows our mind and all gets sucked in.

“Carla Ann” seems to have an eerie Brit-pub rock tone. Am I way off base?

CHRIS: That’s the most straightforward rock song we’ve ever done, bordering on pop. There’s a Jesus & Mary Chain-like bridge. Their album, Psychocandy, had a profound influence on me with all that filtered feedback. Underneath the noise were classic, simple, three-chord pop songs. I used to live with a record addict who’d trade stuff all the time. He bought Jesus & Mary Chain’s first single, “Upside Down,” which had a squealing opening and catchy little riffs. I remember reading an interview where they claimed the greatest song of all-time was the Shangri-La’s “Leader Of The Pack.” Then I picked up the Shangri-La’s Greatest Hits and got myself hooked. They had strings and rhythms and soaring notes you could attempt to capture on guitar.

Your newer songs have an increased emotional impact. Are you writing about first-hand accounts more often?

CHRIS: I guess so. Some songs start with truths and run into fiction. I love to make listeners weep and get drunk with melancholy. It’s emotional purging. Thematically – not to sound goofy – I now expound on subject matter. On “Leave What’s Left Of Me,” I find myself laying on the battlefield wounded, telling someone to leave me there to die and just move on. That was inspired by Kelly Hogan (a former bandmate and solo artist) who moved away to Chicago to work at Bloodshot Records. By the way, she has a split single of Gospel songs with Neko Case coming out soon.

What does a live Rock-A-Teens show generally sound like?

CHRIS: We try to keep it separate from the studio sound, but it’s a crapshoot. In Austin playing the South By Southwest Conference recently, we were sitting in the van drinking Wild Turkey before the show. We went on to play hard and just have fun. But the small stage we played on had a curved corner and one of our guys kept falling off the stage. We just like to keep it raw live.