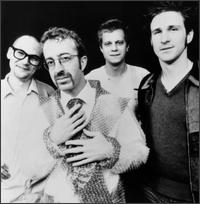 FOREWORD: Skeleton Key is the brainchild of ex-Lounge Lizards multi-media semi-celebrity, Erik Sanko. They were easily one of the best New York City art-damaged freeform rockists hitting the scene in the mid-‘90s. And they deserved better exposure.

One of the best live bands I’ve come across, each individual member had their own distinct personality (at least the first version of this ever—changing entourage). In’97, I got to speak to the entire band prior to a Knitting Factory gig. They were demure off-stage; totally uncontrollable onstage. Sanko’s Skeleton Key went on to record ‘97s Fantastic Spike Through Balloon and ‘02s Obtanium (pictured below postage-stamped EP), but neither caught fire the way they should’ve. Sanko creates marionettes when he’s not busy playing out. This article originally appeared in Aquarian Weekly.

“I’ve been doing artsy music forever,” claims Maxwell, an admitted Captain Beefheart fan. “If you sign a band like ours and bring in a producer to weed out the idiosyncrasies, the final product ends up being an empty husk. But we get no outside interference. The only criteria we have is to find whatever sounds good and manipulate it, I play a $25 Silvertone guitar. Rick plays junk and Erik uses a cheap bass. Our gear is from the technology that preceded the computer generation – somewhat like an abacus.

“If we’re not careful, our music could sound pretentious,” Maxwell confides. ” But we have a sense of humor we use like a bag of salt. And we sprinkle our songs with it. We each have small egos and are willing to listen if someone has a better song idea. We have disagreements. But it’s a pleasure to work with people whose opinions are valued. Some songs come together easily while others need time to be fixed.”

With all the intricate elements assembled into such a fascinating studio smorgasbord, it would seem Skeleton Key face difficulties bringing their ambitious sound to a live audience.

But junk player Rick Lee confides, “Originally, we tried to make the record sound like a live show. It’s tough to get my trash into the live mix, but people say they can hear the flavoring. Our soundman, Kevin McMahon makes sure that sonically the ideas come across. If I don’t have the equipment to create a certain sound, I’ll use something which closely resembles what needs to be expressed. Hell, one of our samplers is a toy! And anything on 16 RPM sounds completely satanic when it’s sampled. My feeling is if it sounds good, it’s in. There’s no discrimination.”

As we get into a conversation about art, Maxwell insists, “For me, it’s easier to discuss our sound in terms of sculpture rather than articulate it in the realm of music. It’s art with a capital F. It’s fun, dangerous, visceral, and hopefully, moving and intriguing.”

Lee, sitting on a couch with a smirk, counters, “I don’t know if Charles Bukowski would consider his writing art. I think sports may arguably be the only real art of self-expression.”

This dichotomy between art and music may be the impetus for the improvised instrumental jam, Hoboerotica.” Inspired by a pornographic stick figure a homeless Arkansas resident made, its skewed percussiveness and witchy moaning get tangled in a freeform exploration.

Both “The World’s Most Famous Undertaker” (a sordid and addicting piece of voodoo) and the Beefheartian “Nod Off” ping and pang and clang, allowing Lee’s enormous scrap heap of percussion objects to fill any open spaces or gaps in sound. “The Spreading Stain,” a fuzzy skullfuck, should satisfy and taunt grunge heads in search of something neatly resembling Nirvana’s most disturbing moments. The muzzled “You Might Drown,” with its transcending sitar and “Blue Jay Way” dreamscape, sounds so stark it practically stares death in the face.

“Well, “You Might Drown” was inspired when my girlfriend dumped me,” Maxwell explains. “I’m merely saying, ‘good luck with your fucked up decision.’”

Skeleton Key hope to break out in a major way on an independent label. By the way, fans should also check out New York underground cyber-punks, Ultra Bide- Skeleton Key gave them their seal of approval.