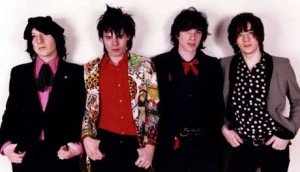 FOREWORD: New York’s lethal Star Spangles like to get rowdy and party down. I met up with them for some drinks in ’03 to help promote the anthemic power pop album, Bazooka!!! We drink like fish and herb was cooked on Avenue B in Lower Manhattan. They took a few years to finally release ‘07s Dirty Bomb, which found ‘em in fine form. This article originally appeared in Aquarian Weekly.

As we gather at a small, loud Avenue A pub in Manhattan one rainy September afternoon, lead vocalist Ian Wilson seemingly jokes, “We had Mc Donald’s for lunch and washed it down with White Russians to settle our stomachs.”

Bassist Nick Price chimes in, “Yeah. And those poppers I took really make my asshole loose.”

Such is life with a pack of wildcards this doggedly decadent, casually unrefined, and pleasurably frivolous.

Originally, Wilson and guitarist Tommy Volume formed the band in upstate Brewster with a different rhythm section, releasing the formative “I Can’t Be With You” 45 R.P.M. on boutique Spanish label, Munster Records. Around that time, Volume was collecting welfare and Wilson was virtually homeless.

“Welfare was great,” Volume insists. “It was actually Social Security Insurance for disability. I did some time in the booby hatch.”

“Yeah. But I’m not an unapproachable douchebag like Jagger,” Wilson quips.

“When we started, it was just me on guitar and Ian would sing,” Volume remembers. “Our old drummer was a stooge and the bassist was a rich guy. They were from the city. The rich guy tried to take over. Our first single came out on pink, red, and black vinyl on a bootleg label. It was raw rock and roll. Our first gig on the road was at (platinum-haired photographer-promoter) Leee Childers of the Heartbreakers birthday party. He gave us our break back in ’97. He was our first mis-manager. We were 18 hanging in a bar and Leee came over and asked who we were. We said, ‘We’re a rock band.’ He asked if we wanted a gig.”

“Price admits, “I listened to the 45 before joining the band. The sound was shitty, but I couldn’t believe they got it together to record something. I was like ‘Wow!’”

Influenced by early ‘80s Minneapolis punks such as the Replacements, Husker Du, and Hoodoo Gurus (whose stunning “Get Her Back” gets covered on Bazooka!!!), instead of current local raves the Liars, Ex-Models, and Yeah Yeah Yeahs, the Star Spangles give a shout out for a litany of little-known, but highly praised, up-and-comers.

“We’re connected to New York bands, just not the ones you read about in the paper,” Volume says. “There’s a handful of bands like the Little Killers, Some Action, the Weekeneders, and Mz. Pakman. We’ve played with established punks Jayne County and the Dictators also.”

“Daniel did it on spec during free time ‘cause he’s our friend. We told him what we wanted and he did it. We don’t have regular jobs so how can you expect us to mix a board,” Price advises.

Valentine surmises, “Daniel’s like the big brother of the band. He really helped us out. We used to have fun hanging out with Tommy and Dee Dee (Ramone) before he died. Dee Dee’s last book, Legend Of A Rock Star, was funny, but the others he wrote were lame.”

On Bazooka!!!, the spitfire exertion “Angela” and the passionate ballad “In Love Again,” summon leathery antecedents the Ramones’ scurvy Rock And Roll High School days. The blazing “Crime Of The Century,” borrowed from ‘70s punk vets Johnny Thunders and Wayne Kramer, fondly captures the naïve broken-hearted scourge of yesteryear. “Stay Away From Me” revisits the electrified bubblegum pop purge of the Replacements, the glam-chanted “I Don’t Wanna Be Crazy Anymore” unwittingly yields to Ian Hunter’s “Cleveland Rocks,” and the sturdy medley, “The Party,” gets drunk on the Fleshtones garage-rock spunk.

Better still, the surging “I Live For Speed” is a timeless sonic guitar anthem, riotously unruly in its raspy rapidity. Nearly as good, the wordy pyromania “Which One Of The Two Of Us Is Gonna Burn This House Down” hurls lunging Paul Westerberg-inspired vocalizing above a scathing melodic din.

“We like classic rock and roll and a lot of power pop, but the garage revival stuff I never got, although I loved the Real Kids,” Price maintains. “I’d take the Fleshtones or the Shoes over half the bands nowadays.”

“Live, we do (Anglo-folkie) Richard Thompson’s “Feels So Good,” (‘60s political composer) P.F. Sloan’s “Been To The Family,” (‘50s rocker) Eddie Cochrane tunes, and something by (cowpunk progenitors) Rank And File,” Price imparts.

As we finish our drinks and get ready to depart the jovial foursome threaten to show me their nuts, then conjure the benefits of cotton candy-flavored soda and speculate upon mixing Grand Monet with Ny-Quil. And no matter what Price thinks, they’re not “mellower than Jack Lemon.” Contrarily, the Star Spangles are probably wackier than a barrel of monkeys.

Wilson concludes, “It’s a yearning to have fun. It’s about driving down the road going crazy. We got that.”