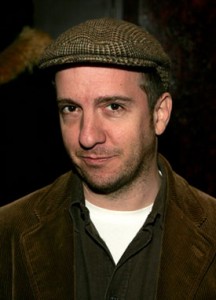 FOREWORD: Reserved singer-songwriter, Stephin Merritt, may indeed be as reclusive and shy as the press indicates. Suffering from an ear disease that prohibits loud music and now living in Los Angeles (after a long spell in the Big Apple), Merritt puts his despair-riddled life experiences into depressive canticles and facetious missives. First time I met him in person, the Magnetic Fields were playing Maxwells and Merritt had his tiny chihuahua named Irving in his pocket prior to their retro-fit neo-Classically vaudevillian art pop confections. This was two years before ‘99s highly respected triple-album, 69 Love Songs, put Magnetic Fields at the top of Village Voice’s Pazz & Jop poll.

Merritt, an oft-times sad gay man, expresses his inner most feelings with satirical aplomb and snickering asides. When I caught up with the nostalgically inclined post-modern bass-baritone icon, October 2000, he was promoting his ancillary band, the 6ths, whose Hyacinths And Thistles arguably bettered fine ’96 debut, Wasp’s Nest. He has since released three fair solo albums, two more fine Magnetic Fields projects (‘04s i and ‘08s Distortion), and a few tertiary albums as goth-bubblegum rogues, the Gothic Archies. This article originally appeared in Aquarian Weekly.

Soft-spoken musical mastermind, Stephin Merritt, is undoubtedly one of the most prolific and engaging songwriters on the current pop scene. Along with co-conspirators Claudia Gonson (drums-piano-management), John Woo (guitar-banjo), and Sam Davol (cello-flute), he heads Magnetic Fields, a fascinating Lower East Side combo that recorded much fine material over the past decade, culminating with 1999’s sprawling, critically acclaimed 69 Love Songs. 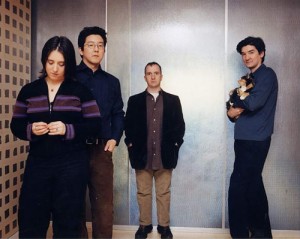 On many of Hyacinths And Thistles confessional love trinkets and innocent romantic paeans, a varied cluster of female vocalists take hold. Sally Timms of the Mekons wraps her velvety contralto around the percussive techno-pop of “Give Me Back My Dreams.” Dippy aged-in-the-wool hippie Melanie resurfaces on the chiming, desolate “I’ve Got New York,” dripping honeyed lyrics atop Margaret Leng-Tan’s classically inspired toy piano.

Sarah Cracknell of St. Etienne, croons softly through the echo-fied “Kissing Things.” Cibo Matto’s Miho Hatori coos sweetly on the “Guantanemera” knockoff, “Lindy Lou.” Ex-Altered Images vocalist Clare Grogan provides delicate restraint to “Night Falls Like A Grand Piano.” Folk renegade Odetta sings operatically on the accordion-laced “Waltzing Me All The Way Home.” And Squirrel Nut Zippers’ Katharine Whalen purrs her way through the elegant acoustic lullaby, “You You You You You.”

Though Merritt denied the charges (“you think they sound like I do?”), two well-respected indie rock legends sing in deep baritones not dissimilar to his own. First, ex-Husker Du post-punk maven, Bob Mould, does a severe turnabout, fervently crooning above the longing piano ballad, “He Didn’t.” Then Divine Comedy frontman Neil Hannon takes on the snippy cabaret ditty, “The Dead Only Quickly Decay.” New wave holdover Gary Numan goes intergalactic on bouncy synth-charged “The Sailor In Love With The Sea” while another link to that androgynous post-punk era, Mark Almond (ex-Soft Cell), caterwauls across the tropical Tahitian warmth of the exotic “Volcana!” Experimental instrumentalist Brian Dewan lends delicate zither to the Momus-sung “As You Turn To Go.”

But wait, there’s more! In partnership with synth-pop composer, Christopher Ewen, (founder of ‘80s new wavers Figures On The Beach), Merritt and Gonson also have a dun-loving side project, Future Bible Heroes. Following the full length Memories Of Love, they reconvened for the recent five-song dance floor percolator, I’m Lonely (And I Love It), a title that hopefully reflects Merritt’s current state as a not-so-misanthropic loner.

The following is my conversation with Merritt.

You’ve been casually lumped in with lo-fi or indie rock artists, but I wouldn’t classify your music as either.

STEPHIN: it’s common to get locked in with things that don’t fit you very well. I think it’s because most musicians could be labeled easily. People who can’t are subjected to the habits of critics who find it easy to label people. The record industry is split intopeople who buy records the week they come out and people who don’t. The people who don’t in the end, actually buy more. The best selling record in the US is the Eagles Greatest Hits and Michael Jackson’s Thriller. Both are catalogue albums that are not necessarily teen driven. Th Eagles, in particular, are self-conscious adult rock.

Do you think today’s teenybopper trends compare favorably to the Teen Beat generation of the ‘60s and ‘70s?

But the new teenyboppers seem to sacrifice innocence and naïve sexuality for wimpy pre-chewed neo-orchestrations.

STEPHIN: I wouldn’t want to generalize, but the albums by the Kasenetz-Katz groups were putrid. The singles we remember kindly. There were about fifteen great ones. You may find fifteen great ones in the last five years. Video changed a lot. Milli Vanilli didn’t sing their own songs. That probably changed the industry too. Now you can’t be Kasenetz-Katz anymore.

Do you think modern teen pop will stand the test of time?

STEPHIN: I think song-wise, this is a pretty wretched period, but recording-wise, it’s quite wonderful. There’s a huge variety of productions. I really like the new Madonna record, Music. As a song, it’s terrible. As a record, it’s really fantastic. That’s the first thing in ten years that she has done that I like – since “Vogue.”

You’ve been compared to the greatest songwriters of the 20th century such as Cole Porter, Jerome Kern, and Irving Berlin.

STEPHIN: I take comparisons with a grain of salt. I don’t have a lot in common with Guided By Voices or Cole Porter.

How does New York City inspire you?

On Hyacinths And Thistles, you show a great affinity for choosing interesting female singers from wide ranging musical backgrounds.

STEPHIN: I write songs I think are for a particular singer and have Claudia track them down to try to sing them.

How does the new Future Bible Heroes EP compare to the first LP? The EP seems inspired by ‘80s new wave.

STEPHIN: It’s more of the same. We wanted to put out everything we’d done in that style before going onto a new album with a different theme.