Truth is, The Go began as a tattered teen band looking for a killer lead guitarist to fully energize their noisily apoplectic garage leanings. Over time, their scruffy elemental restlessness would be superceded by more melodic tunefulness while White became a shining red and white-attired star.

“I try to be as creative as possible. The new album title, Howl on the Haunted Beat You Ride, means anything goes,” Harlow allows. “In ’96, John and I were in Mark’s basement making demos – thirty songs no one’s ever heard. Who knew what would happen. I enjoy taking art seriously, but I also like cultivating the ability to laugh at the ridiculous.”

And what might be construed as ludicrously comical is the whole world endorsed the White Stripes without taking a good look at its trailblazing leaders’ past – until now. White helped The Go shape the raw ‘60s-informed amateurism ramshackle ’99 debut Whatcha Doin’ so determinedly accrued.

“We wrote “Keep On Trash” together in rehearsal. I did chorus and words. Jack had verse and riff,” Harlow affirms. “Jack was good friends with our old bassist, Dave Buick, the James Dean of Detroit and genius behind Italy Records. John and I had stood stage-front watching his old country-styled band, Two Star Tabernacle, once. So we went to Dave’s house to get Jack to join. He was on the couch, said yes emphatically, and was thrilled to join a rock band. It was his dream”

He continues, “ Trouble was, he may’ve worked it out separating church and state doing both the Raconteurs and White Stripes, but when it came to The Go, he couldn’t. His vibe was too strong. So is his routine with red and white, the number three, and the (faux) sister-brother boy-girl act. We butted heads. We were young bulls trying to run down that hill.”

In fact, some leftover unreleased Jack White sessions with The Go will see the light of day soon. Harlow calls them bad tape recordings that don’t relinquish or diminish the combo’s initial primal lo-fi splotch.

But Harlow recounts how he scrapped the original sessions, feeling averse to its polished sheen.

“The ‘red album,’ as we call it, was done in England and was too pristine. The whole London experience, setting up shop in Whitney Houston’s studio for ten days and being catered by a house cook, was too much. You can’t give rockers anything they want and expect the album to sound good. We went into a smaller nearby studio, fixed it, went back to Detroit, threw it on cassette, and gave it to the mastering engineer.”

Moreover, former label Sub Pop had rejected the soon-to-be-latently released Free Electricity three years hence, claiming it was ‘too noisy.’ But a laughing Harlow differs. “No. It was more of a pissing war. I mean, they signed (cataclysmic noise-mongers) Wolf Eyes.” 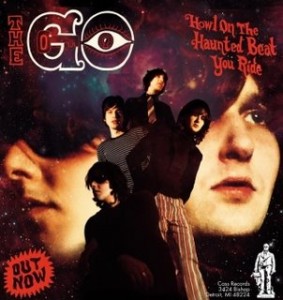 Harlow says, “That’s a beautiful poem. Awhile back, I was playing lots of Ginsberg’s poems. I wanted to put one to music without forcing it. I found seven that’d work as songs instead of a corny poem put to music. That one sounded like someone at a kitchen table recording at 6 A.M. It’s what we wanted.”

Glad to be totally DIY via production and recording, Harlow insists, right or wrong, it’s the only way for him to go right now.

“There’s no interpreters standing between us and the machines. These are our decisions and ideas come to life. Sometimes engineers made decisions- shape of bass or tom tone, but this music came directly from our minds,” Harlow proudly declares. “There’s a place in the world for this. It sounds like classic rock and roll, but it’s new, same for the White Stripes. Some say they’re Led Zeppelin rip-offs, but I feel sorry if that’s all you get out of them. Don’t rob yourself of the experience.”

Though the influence seems indirect, Harlow admits being a fervid fan of The Who. Wearing mod suits on occasion might be a trivial giveaway, but it’s obvious many legendary rockers have profoundly influenced The Go’s blaring intensity.

“The structures, arrangements, and pop formula may be different, but it’s the same process,” Harlow notifies. “We absorb classic records while searching for obscurities. On a recent long drive, we found The Who’s Live At Leeds for $10. And A Quick One While He’s Away may be their best. Abbey Road I could still listen to end to end. I can’t get over it. I’ve been listening to Sgt. Pepper with headphones on forever. It’s magic. The Beatles were four poor kids who grew to make beautiful records. The first Velvet Underground and Jimi Hendrix albums are brilliant. Focusing on that positivity is key when approaching our music instead of being self-defeated and saying no one will ever make another Beggar’s Banquet. Why not?”

Understandably, Harlow awaits the next Age of Aquarius, due to hit the universe, according to his estimates, in 2012.

“I stayed in Denver with people who introduced us to the Dalai Lama. This woman explained how they’ve traveled non-stop for a peace group helping refugees get clean water and such. In the Age of Aquarius, anything can happen. Male-female energy could be in perfect balance or something could go tragically wrong.” He concludes, “Back to the timeless ‘60s, we’re intellectual slaves to those artists’ conquests. Maybe it’ll happen again. How’d Lou Reed hook up with Jim Morrison and hang out in the same place and become legends. We had glimpses thereafter, perhaps (Joy Division’s) Ian Curtis, maybe my old buddy Jack White.”