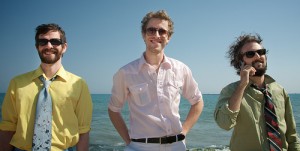 FOREWORD: In 2007, it looked as if The Teeth would gain a firm grip on the indie rock biz with You’re My Lover Now. But it was not to be for the Philly boys, at least under that toothy moniker. After a March ’08 breakup, the main members announced plans to come back as The Purple. This article originally appeared in Aquarian Weekly.

Attending Temple University as an art student, Aaron MoDavis soon gathered the troupe and began separately composing tunes alongside his brother. Both had an uncommon knack for embellishing a seemingly limitless supply of distinct melodic structures with solid hooks and converging riffs. Over time, the siblings would tighten up their endearingly madcap lyrical ideas while expanding the range of strange characters lurking around inside a briskly expanding catalog.

“Every song I write is supposed to be slow but somehow end up getting faster. And some of our stuff is so heavy it pays to have a sense of humor,” Aaron shares, before breaking down the Teeth’s earlier recordings.

“Our first record, ‘02s Send My Regards to the Sunshine, had lots of songs and not much focus as a whole cohesive collection. We were developing and hated on a lot of bands we knew, but weren’t confident enough with out own songwriting and overcomplicated its complexity. On the 6-song EP that followed, Carry the Wood, we felt more comfortable and didn’t try to push so hard reacting to everybody else,” Aaron earnestly reflects.

On the Teeth’s latest full-length disc, You’re My Lover Now (Park The Van), they manage to collide wry needling with serious conviction. Using the tone of American Southern novelists John Steinbeck (Of Mice And Men/ The Grapes of Wrath) and Sherwood Anderson to casually affect his barbed tales, Aaron became subconsciously struck by the well-designed fictional images masterfully detailed.

Faux-nautical expeditions such as the Decemberists-nipped violin-draped balladic shanty, “A Fight In The Dark,” and carnivalesque seafaring klezmer quandary “Molly Make Him Pay” have a cognate antediluvian feel. The latter, a maudlin pre-Depression-era styled waltz, tactfully impinges upon astonishing Philly peers Man Man’s freakishly experimental Zappa-Beefheart-Waits-informed creations. But that’s only an informed assumption.

“It’s hard to pinpoint the influence for “Molly,” but it’s not rock and roll. I listen to more Classical now than anything else. Yet it’s hard to admit that because you sound like an asshole going, that one’s by Beethoven,” Aaron snidely chuckles before confirming how none of the Teeth can actually read music. “Most of the chords I couldn’t tell what they were. We understand music well, but aren’t necessarily technical. Instead, we’re focused, active listeners.”

After trumpet and trombone accessorize the degenerate down-and-outer taxi standoff, “Yellow,” the Teeth get back to rockin’ in the free world on the spontaneous guitar-powered tambourine-shaken rampage, “It’s Not Funny.” Then, the boys take a breezy stroll with “The Coolest Kid In School” (a snide acoustic folk ode to the rad dude getting hot chicks against deviant wishes of a nerdy naïf) and ride chuggin’ percussion through melodic bass and siren six-string on awkward tryst “Walk Like A Clown.” Indeed, there’s a veritable cornucopia of style jumping goin’ on here.

“The first tape I ever owned was by Elvis,” Aaron says. “In high school, Pete and I got into the Beatles and David Bowie. From that point, we got led to lots of stuff. Brian’s background was Chuck Berry, James Brown, The Band, and blues music. He got us to appreciate that along with the Stooges…even 10 CC.”

Although Peter latched onto ‘60s rock quite firmly, Aaron began to also respect the operatic lamentations of Roy Orbison and the lounge-y Brill Building cocktail pop of Burt Bacharach.

“Bacharach’s one of the most original songwriters-arrangers. A lot of people think he’s got a lot of baggage because numerous hokey, overly theatrical singers made his music seem dated. The songs sound simple and silly, but when you actually backtrack to what he was doing, all the songs are strange, complex, and well done.”

Since many impressive early-to-middle-period rock and roll icons bedazzled the Teeth, I naturally assumed they maintained a good rapport with their record label’s disparate fanatical mod pop acts, which includes the emergent Dr. Dog, Capitol Years, Golden Boots, and the High Strung.

“Us and Dr. Dog are good friends. We all played in Philly before we were signed. We had a friendly competition and admired each other. There was a domino effect getting Park The Van’s attention. Dr. Dog gave them a tape of ours when the label started in New Orleans and we signed contracts there, but Hurricane Katrina blew it away. They moved to Schwenksville, Pennsylvania, which couldn’t be any different. Chris Watson used to run the label out of an apartment. Now it’s offices.”

Considering the wealth of abstract notions divulged within the Teeth’s semi-animated odysseys, fans may assume You’re My Lover Now’s cover design would be sprightly kaleidoscopic. However, Aaron favored an interestingly antithetical approach, affixing the unadorned black setting with a noir dark-haired couple smooching.

“It’s a reaction against all the bands with a deep meaning title for an album,” Aaron relinquishes. “Plus, we like classic soul with generic, simple titles like (Magic Slim’s) blues LP, Gravel Road. Eventually, by buying Bowie’s Young Americans, the next step was making connections and following the dots back. The Beatles Rubber Soul was the Fab Four trying to do Motown. The Supremes and even the Platters were influential. I like the throwback. You can’t read into it. The cover shot is just two people kissing.”

So what’s up with Aaron being a decapitated victim on the last page of the inside cover?

“It’s pretty lighthearted. We ran out of lyrics to fill the booklet, so we gave it a little throwaway feel,” he snickers. “We get too self-conscious about lyrics sometimes so to buffer the personal melodrama we mock it and it makes us feel less uncomfortable.”