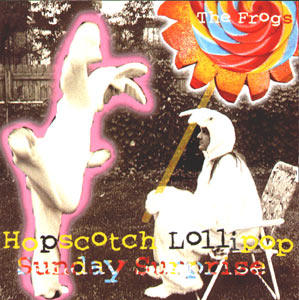 FOREWORD: I was not so much impressed by the Frogs off-the-cuff home-recorded coffeehouse-styled punk-imbibed novelties as much as I was intrigued by their audacious rips on conservative moralists and asshole media types. Wisconsin brothers Dennis and Jimmy Flemion began the Frogs was back in 1980, but only received properly publicized exposure ten years after when several soon-to-be-famous grunge artists touted them. I interviewed Dennis Flemion in ’01, when the Frogs last album, Hopscotch Lollipop Sunday Surprise, was released, and then put out of print, within months. This article originally appeared in Aquarian Weekly.

Witty Milwaukee deviants, the Frogs, gained recognition, and the respect of Nirvana, Pearl Jam, and the Smashing Pumpkins, by giving the finger to hypocritical conservatism and deriding phony moralists.

Recently, the Frogs unleashed their most polished, unified, and discreet long-player, the pop-rooted Hopscotch Lollipop Sunday Surprise. Gone is the lo-fi amateurism and a portion of the duo’s offhanded satire, replaced by conscientiously heartfelt glam-rock confections such as the buzzy “Whisper,” the stoically-sung fuzz-toned “Sleep On The Street,” the T. Rex-sniped “Bear,” and the implosive “Better Than God.”

Nevertheless, the Flemion’s can’t resist getting goofy for the blow job-addled “Know It All” and the warped psychedelic dreamscape “Nipple Clamps” or dismissive on the vehemently straightforward “Fuck Off.”

Your new album has a more serious tone.

DENNIS FLEMION: We’ve played serious songs since our inception, but the labels don’t put them out. People don’t want to hear them in bars. They wanna rock. Unless you’ve built up an audience and you’re a demagogue, it’s hard to get people to sit back and listen. The days of Bob Dylan at the Royal Albert Hall, as documented on Don’t Look Back, when you could hear a pin drop, are over. Nowadays you’d hear people yelling song titles and shit. Everybody’s in everybody else’s business – which is a problem. They do it with behind the scene shows about actors, demystifying everything. It was better when we were in awe of these people. You get greater insight to spur your mind, but it makes it contrived and lacking of substance.

Are you pissed off that ultraconservatives don’t understand the Frogs sarcastic wit?

DENNIS: We were around before politically correct culture existed. Since 1980, our independent music has annoyed naysayers in the press.

DENNIS: I’m of the mind it was a goof. That’s why Only Right And Natural’s “Drugs” had a priest with a yeast infection. The person who puts down or accuses someone is usually guilty of the deed. John Lennon believed in peace, but was an angry man with violence inside him. Our songs aren’t pessimistic or evil, although saying that is like slitting my own throat. It’s detrimental to our band to say we’re not controversial because a certain segment of society views us that way. People are on different wavelengths with PC culture. Like someone said about Hitler’s reign, ‘It’s a lucky day for the ruler when the masses don’t think.’

If you know anything about spirituality, you know it’s hard to walk the walk. You might long for something on the side. This is normal. I’m just pointing it out. You get an orgasm for a few seconds of heaven. You feel connected. But then you’re kicked out of the garden. That’s the carrot religion holds up for the culture. After hearing it long enough, you finally go, ‘It’s not taking me there.’ It’s a mood-altering image religion pimps on.

The stuff we make up is done on the spot – which can be difficult. We can write on any universal theme and strike a chord. But there’s no place for censorship in art, whatsoever. The purpose is to express. That should never be shackled. Kurt Loder on MTV was discussing how lyrics could lead to hate crimes. What’s next? Banning everything. It makes you angry to see how the public gets snowballed.

Your humor seems to mock local Wisconsin cheeseheads as well.

DENNIS: It’s probably a reaction against them. The levelof hick stupidity is unbelievable. You shake your head in disbelief. Some of my sense of humor comes from my parents. But I took it farther than they did. I believe in freedom of speech and expression of doing with your soul whatever you want. Why be thin-skinned? There’s so much fear out there. It’s the dumbing down of society.

TV feeds off stupidity. Clinton’s out of office so now the liberal media that previously sucked his dick could smear his already horrid, diminished reputation anytime there’s a slow news day.

DENNIS: Now Bush is going, ‘We have to straighten out the economy.’ What was wrong with the economy? They manufacture this bullshit in the press. Like we had to go bomb some country. They show it on the news and there’s nothing going on there. Why bother? What’s the threat? But Iraq pulled a fast one on us (during the Gulf War) when they started burning the oil fields. The footage was similar to volcano eruptions. That was more punk than any band out there. That fucker (Saddam Hussein) is on the edge.