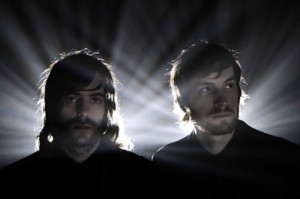 “Evan had a tiny bedroom with a laptop setup. We had one guitar, a distortion pedal, and we borrowed a bass from his roommate,” Stroud says. “It was totally minimal and we banged out “17 Years” in one day. We got pretty lucky receiving exposure. Our A & R guy from London found our webpage and got in touch with us.”

“The first two we did in Evan’s apartment only had a couple sounds – guitars, keyboards. We did this one in a real studio with more instruments, adding strings, Grand piano, and organ tones. There were some cool World music elements like tablas. People think I only play guitar, but I did harpsichord, piano, and get annoyed when everyone thinks Evan’s the big genius who plays everything else,” the snickering Stroud informs.

Influenced by conceptual guitar wizard Robert Fripp and Queen’s bellwether axe-man Brian May as well as Jimmy Page’s acoustical solo endeavors, Stroud’s heavily processed and headily manipulated six-string constructions transfix or transcend the tidily detailed arrangements. The use of mellotron on LP3 serves to open up the savvy synthesized symphonies.

Whimsically, song titles such as the latter are inconsequential, goofy derangements meant to provoke chuckles.

“The titles don’t have to mean anything,” Stroud chuckles. “Lots of times we’ll have funny working titles that stick.”

“We both listen to a lot of hip-hop, especially Evan, who makes the beats,” Stroud admits. “My favorite rapper ever is Ghostface. I loved the first Raekwon record and all the descendant Wu Tang Clan ventures. I saw Wu a few months back and Raekwon did some ace freestyling. But I don’t listen to hip-hop as much now. I feel it’s kind of fucked. RZA’s the only one who seems to know the business.”

“I love ELO, but I didn’t have them in mind for “Brulee.” I remember the first night Evan played me a couple of beats and that stuck out in my mind. I thought we were gonna go a different route with it but we put these happy sounding chords over it and it sounded kind of funny,” Stroud claims. He then deduces, “We wanted a psychedelic reggae-ish vibe.”

Stroud explains, “We’d walk into Catskill – an upper New York town where there was nothing. It’s secluded – a half-hour from the original Woodstock concert. We took a walk on Main Street and found an Indian rug store. We visited it a lot while recording. The owner would invite us back to his office, give us free huge Indian dinners, and tell us crazy stories. We took its title from him.”

He goes on to say, “There was an instrument in the studio that you could put on a record – thin vinyl – with samples of organ and there’s an organ where you can play them. So we put a bunch of these records on top of each other and ended up with a bunch of organ-moog sounds. To me, it relates to Bollywood. And it has a “Hotel California”-like guitar solo.”

In the live setting, Ratatat enlists the help of Stroud’s pal, Martin, to handle organ, augmenting and magnifying their already illusionary musicality. Accordingly, future recordings and live shows may get other people involved. But a radical departure in style does not appear imminent. Maybe they’ll find some guest vocalists to spark up new musical ideas. Commendable remixes for a diverse array of artists including old school rapper Biz Markie, weirdo Icelandic diva Bjork, and sly Brit-rockers Television Personalities are already available to consume.