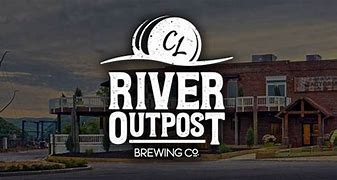 Occupying a multi-functional food and entertainment event space on the Hudson River one mile South of landmark Peekskill Brewery, RIVER OUTPOST BREWING COMPANY has been operating inside the red brick high-ceilinged Factoria warehouse since February ’18. Funded by nearby Captain Lawrence, this gargantuan indoor/outdoor pub only distributes its beers onsite.

Before becoming a pilot brewer of sour ales and barrel-aged beer at Captain Lawrence, University of Vermont alumni Mc Lean Cheney proved his wares as a beverage industry consultant, earning his wings at Colorado’s Aspen Brewing before he and his chef-wife moved back to his home state of Jersey, landing a gig as head brewer for Connecticut’s Half Full – crafting their award-winning Bright Ale. It wasn’t long ’til Cheney got promoted from Captain Lawrence to man the tall glass-enclosed stainless steel tanks at independent offshoot, River Outpost.

Cheney’s four IPA’s, three lagers and one sour ale stay within stylistic range, but each bring out a unique aspect just beyond the boundaries. Try the raw bar, hearth-fired pizza or sandwiches and burgers to chase down the delightful suds.

My wife and I arrived on a sunny Wednesday afternoon, late September ’21, to consume all eight homemade brews.