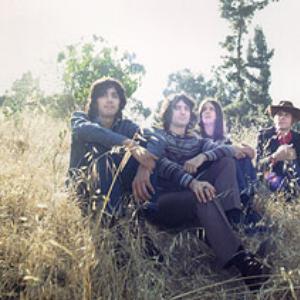 By early 2000, a brilliant self-titled Sub Pop album emerged, capturing the rural-bound attention of the No Depression sect. A sun-baked treasure owing its earthy hippie sensibility to Parsons as well as ‘60s Haight-Ashbury psychedelia by the Grateful Dead and Quicksilver Messenger Service, the Beachwood Sparks debut gave away its vintage “Freedom Rock” idiosyncrasies by featuring bright graphics of an old VW van, butterflies, and rainbows.

Less beholden to Country & Western and mountain folk, ‘01s Once We Were Trees expands B-Sparks range while maintaining a revered rootsiness. A newfound somber spirituality blankets the organ-doused transcendental sermon “Close Your Eyes” and the Gospel confection “By Your Side” (an outside composition written by R & B chanteuse Sade and showcasing guitarist Chris Gunst’s affectionately fragile falsetto). 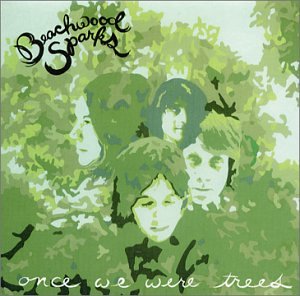 Since Once We Were Trees was recorded at J. Mascis’ studio and he added guitar to two songs, what common influences did you share with him besides Neil Young?

CHRIS GUNST: Old time rock and roll, the Incredible String Band, and Love we all like. And all punk stuff.

It’s ironic you bring up San Francisco flower power band, Love, since there’s a psychedelic strain running through your music and album artwork. “The Hustler” and “Old Manatee” are reminiscent of the legendary Grateful Dead.

We share some of the same instrumentation as so-called hippie groups, like banjo. I didn’t listen to the Grateful Dead much until recently. But then I read a review that said two of our songs sounded like the Dead and I thought that was crazy. Since then, I’ve listened to American Beauty.

You should search for a copy of American Beauty’s equally compelling early ‘70s bookend, Workingman’s Dead.

Definitely. When we recorded the first one, we were barely a four-piece. We played a few gigs and were young. Now we have more of our sound developing. You’ve got to stay together and make it through. I was a college DJ at Loyola Marymount’s KXLU in Los Angeles. It’s all underground music. I love all music. When I was young, it was only punk and indie. I wasn’t even looking for older music. But once you find bands you like that are modern influences, your record collection starts growing quickly.

Going beyond the ‘60s references of the Byrds and Dylan, are you also indirectly influenced by ‘50s Country-folk legends Hank Williams, Merle Travis, and Woody Guthrie?

Most definitely. We love the Louvin Brothers, Johnny Cash, and Hank Williams. Any time I hear old country or bluegrass, I love it. Now, I’m getting into old folk-Blues like Mississippi John Hurt. Anything on the Arhoolie Record label is the best thing I ever heard. I love Nina Simone. She’s a huge influence on me because she’s very emotional musically. I’m a big vinyl collector when I have the money.

There’s a homily-like religiosity to the new album I didn’t recognize on the debut.

Yeah. “Close Your Eyes” definitely. It’s just the group turning into a vehicle for that. There’s a lot of stuff people have their eyes closed to. An increased consciousness lends you to inner thought. If you want to be a better person, it takes a lot of self-examination.

How’d the reflective Once We Were Trees title come about?

It came from a period in our lives when we were more stable and things were more beautiful. Now, it’s harder to find beauty in anything. People have their minds turned off.

Amongst its melancholia lies a sunnier lyrical perspective the debut only hinted at.

In our own heads, we look for hope and global happiness. We’re looking for some soul and spirit. It makes the music sound happy and triumphant, even if the words are sad. You’re looking for something to save you and the music inside my mind is outrageously glorious. The sentiments of Gospel make me feel better.

Does Beachwood Sparks have a big redneck following in the Deep South?

We do the Louvin Brothers’ “When I Stop Dreaming” and Aretha Franklin’s “Do Right Woman.” The Burrito Brothers did a version of (the latter). “Close the Door Lightly” by Fairport Convention is a folk song written by Eric Andersen we do. Also, the Equals “Good Times Are Gone Forever.”