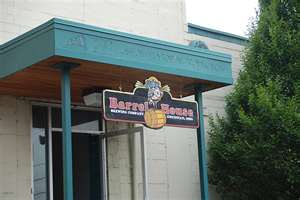 Before visiting the so-called Queen City, June ’04, a spectacular multi-vehicle police chase took place as my wife and I drove from the nearby airport in Hebron, Kentucky (just across the Ohio River) to Cincinnati’s midtown. By all accounts, it was a serious drug bust. But cool to watch from up close.

As the first large mainland city in America, Cincinnati originally gained respect as a steamboat shipping corridor and remains a big part of the midwest Rust Belt. Its performing arts community is one of America’s best, but currently the city’s craft beer scene lacks depth.

Staying at a first-class hotel on the cheap made it easy to peruse the beautiful Fountain Square area just a few streets up from the riverbank where Paul Brown Football Stadium and Great America Ballpark now reside. After initially stopping by Nicholson’s Tavern, a Scottish pub offering Black Mac (Guinness Stout layered over Mc Ewan’s Scotch Ale) and Bumblebee (Guinness over Boddington’s Ale), my wife and I went uphill to the rougher West End section where nightclubs, cheap grub, and heavy partying ruled.