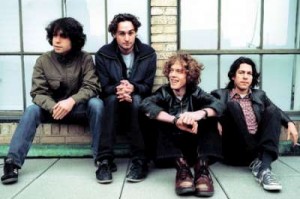 On their breakthrough major label debut, The Strangest Things, New York City-based Longwave lather emotionally penetrating lyrical concerns with luxuriant atmospheric moodscapes full of sonic angular guitar bluster, bell-toned melodies, and probing rhythms. Before touring Europe in 2002 as openers for audacious Aussie rockers, The Vines, this refreshing quartet developed their repertoire and built a firm reputation performing at small Manhattan clubs CBGB, Baggot Inn, and Sidewalk Café (with an accordionist). Singer-guitarist Steve Schlitz even did a solo acoustic set warming up for Elbow at the larger Bowery Ballroom once. 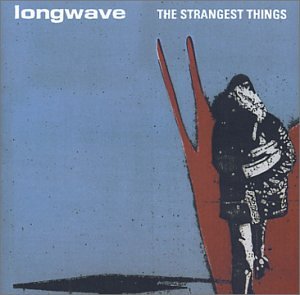 Originally from Rochester, Schlitz and soon-to-be Longwave drummer Mike James (formerly guitar and vocals) began local band Native Kin at age 14 and within a few years had opened shows for jam bands Moe and Screaming Cheetah Wheelies. When Schlitz moved to New York City in search of musicians, he met Queens-based bassist Dave Marchese through a bulletin board ad and then hooked up with Petuluma, California-bred guitarist Shannon Ferguson, who set up a recording studio for initial demos. Soon after, James moved from the rural confines of Rochester and came aboard.

STEVE: We had a different drummer at the time. Shannon recorded it in our rehearsal space with an engineer. Midway through the recording, Shannon joined the band and we became more serious. Then, we did a 5-song EP and Jim Merlis became our manager and got us signed to RCA. My singing changed from the debut to the EP. There’s another jump in vocals because we’d been playing shows all the time and I had greater confidence.

I like how “Wake Me When It’s Over,” builds from minor chord dramatics to full-on dirge.

STEVE: We wrote that together in London in a rehearsal space. I went up to go to the bathroom. Then, I was talking to one of the guys in the Libertines to see if he had anything good to say, and halfway through our conversation I had to break it off because these guys (Mike and Dave) were playing a beautiful piece of music downstairs. I heard it through the floor. I thought, “who’s that?” Dave played this great bass line that’s like 8 minutes long. We were gonna close the new record with it.

Instead, the beautiful wordless lullaby “Day Sleeper” got to be the lucky closer.

STEVE: It’s an old one. At the eleventh hour it went on the album. The day we mastered the record is when we decided to put it on.

Despite its U2-ish angular guitars, “Everywhere You Turn” reminded me more of ‘80s symphonic new wave by Orchestral Maneuvers In the Dark or Simple Minds.

DAVE: I don’t think that really came into play. I grew up on (Long Island station) WLIR and listened to those bands, but I don’t look to them as influences. It’s more from modern rock like U2. “Wake Me” came together in ten minutes, but that one took about twenty.

“Pool Song” has a jangly resonation. Is that song about lessons learned from teenage indulgence?

STEVE: I wrote it as a joke and didn’t like the words. Ever hear “That’s Entertainment” by the Jam? So it’s got these two chords, A and F sharp minor. I thought it’d be great to have a song like that. So we were sitting next to a pool on tour and found our oasis in Phoenix, I think. We’d been driving all-day and night and decided to relax at this hotel pool. Mike asked me to play this guitar riff for him and I sang “when I was young.” It happened so fast. I came back to New York and finished the words but didn’t think it’d be any good. I liked the arrangement we came up with, but at the time I thought it was a rip-off.

There’s a naive innocence running through the album. “Tidal Wave” seems to be about surviving a damaged relationship and persevering.

STEVE: That’s another one I wrote that I didn’t think was any good. We put it on a 4-track tape and listened over and over and finally I came around.

“The Ghosts Around You” nicely layers sonic guitar sustenance above a pretty bell-toned riff.

STEVE: I thought it was a little like the Cure even though they don’t do that kind of guitar stuff. But it’s really dark in feeling.

How did Dave Fridmann’s production affect the new album?

DAVE: He added various accents, stressed release, and had good song sense. He helped us with the details of some drum and bass parts and tried to cut it completely live. A lot was first takes and no overdubs.

STEVE: I’d tell him I want to go back and re-do guitar and get it better. He’d play back the first take and say, “you’re not gonna do this better. It’s great the way it is.”

DAVE: I’d want to play things over because it was sloppy, but he thought it was great. “It’s how you play. It’s cool,” he’d say.

DAVE: I like that comparison. It becomes difficult sometimes to figure out what you’re doing because the guitars are really textural and very big on top of that. But it’s that ‘less is more’ philosophy.

STEVE: We thought about the sequencing a lot. I liked when there was even more of a thematic line but it wasn’t as good musically from start to finish so it was changed.

DAVE: (kidding) I thought our next album should be a rock opera of the Marx Brothers’ Duck Soup.