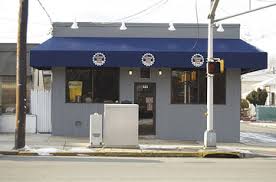 In a tiny gray-painted corner lot next to a florist and across from renowned Holy Cross Cemetery on the quieter part of Ridge Road in Bergen County’s southernmost town, North Arlington’s warm and friendly COPPER MINE PUB is the humbly ambitious masterstroke of blue-capped twenty-something owner, Vito Forte. A craft beer enthusiast who grew up in the industry from an early age, he’s been learning steadily about the spirits business since working weekends at a local store.

On a sunny Thursday in April, I finally got to peruse this intimate neighborhood hangout and the homey ambience was all at once palpable. Named after the historic 18th century Schuyler Copper Mine (one of the first such mines in North America), this unpretentious dive bar couldn’t be any more hospitable. Perfectly placed between Routes 3, 7, 17, 21 and the Garden State Parkway and situated between the Passaic and Hackensack rivers a few miles from the Meadowlands Complex, Copper Mine’s a true blue dusty old gold mine.

At 4 PM, there’s already a dozen diversified brewhounds trying out Vito’s magnificent tapped selection. White-collar businessmen, local students and a few young women make their way in today. Within a 180-minute stay, I’ll drain a few delightful ales ranging from wine-y sour ale to sweet smoked German rauchbier. And I’ll be back for an amazingly resolute Belgian-styled Alaskan beer during dinnertime on Saturday.

“I was lucky,” Vito says as he tends bar from a stool next to the front window. “I worked at nearby Rutherford Wine Shop while in high school. I started in ’99 as a freshman. From day one, they were into better wines and beers. I learned at a young age. I stocked shelves and worked there through college.”

Turning a rundown ‘old man’ saloon into a hip craft beer haven by the autumn of ’08, Vito did a few necessary renovations before establishing his rustic joint. But it all came to fruition quickly.

“I replaced the floor, which was badly carpeted, and put down tile. Then I took out the horseshoe-shaped bar and replaced it. And the basement walk-in cooler is new,” he explains while I finish vinous, cherry-soured, white-wined, oak-dried BFM Abbey St. Bon Chien.

At this point, Brendan, a Rutgers-Newark MBA night student, walks in for a spell. We try some double-fermented, bottle-conditioned water kifer, a bacterial yeast-sugared libation created by a Bayonne chiropractor that tastes sweetly grape-juiced at this young age, but will attenuate to a vinegary cider-like sourness over time.

As Vito’s local buddies continue walking in, I notice Dogfish Head 120 Minute India Pale Ale is by far the most popular drink here.

“IPA’s go out the fastest. They’re increasingly popular,” Vito says. “I like all beer styles. I’d never turn down a bourbon-barreled Imperial Stout. That’s one of my favorites alongside really good sour ales. But I also appreciate a good IPA.”

“We used to carry a lot more bottles, but we trickled it down to specialty bottles of more obscure or rare stuff unavailable in a keg locally. I love Jolly Pumpkin. They’re very artisanal and every batch is variegated. Their kegs are rare so I keep bottles on hand. I understand sour ales are expensive. They take longer to make and a lot of effort goes into them – sometimes aging in oak barrels for years. But if the beer’s good, customers don’t mind,” Vito justifies.

I dip into Schlenkerla Oak Smoke, an ambitious wood-burnt rauchbier with much more malt sweetness than usual smoked beers, to finish my initial three-hour sojourn.

Vito concludes, “The normal crowd’s like today. All these southern Bergen towns I draw from are like one square mile – Rutherford, Lyndhurst. It’s like a big checkerboard. Last week, some Texans came in. Local chemical factory workers, pilots from Teterboro and a few Toms River postal employees swing by too.”

I trek back to Copper Mine with my wife and youngest son to chow Jo Jo’s Pizza slices, grabbing a table to imbibe Anchorage The Tide & Its Takers. A Belgo-American ale aged in Chardonnay oak barrels, its orange-dried lemon rind tartness penetrates white-peppered basil, thyme and lemongrass to the sweet honey malted backend. As with my previous stopover, there are several knowledgeable beer fanatics scrutinizing Vito’s vital selections.

Make sure the Copper Mine’s on your ‘must list’ of diminutive north Jersey neighborhood beer bars to visit along with Bogota-based Andy’s Corner Bar and Haledon’s Shepherd & Knucklehead.