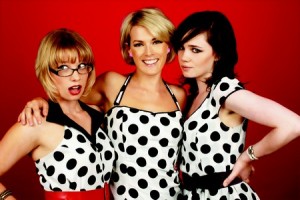 FOREWORD: The Pipettes are an early ‘60s pop geek’s wet dream – adorable dolled-up chicks doing synchronized dance routines fronting a sturdy melodic rock band that’s not afraid to get dirty. At the Gramercy Theatre, late November ’07, they rose to the occasion, getting fans to dance along and snicker at their sassy teen brashness. This article originally appeared in Aquarian Weekly.

Bursting forth with the kittenish extraterrestrial transmission, “We Are The Pipettes,” a smirking braggadocio lead-in boasting catchy choral cheekiness, kitsch-y melodic illumination, and seeping keyboard swing, the perky septet jump stylistically like a wild serpentine fire on their sparkling debut. Cabaret hip-hop rock-sopped shout-out “Pull Shapes,” sympathetic call-n-response orchestral chime “Why Did You Stay,” and plucky B-52’s-careened “Dirty Mind” show off the diverse range of this happily juvenile outfit.

More soulfully struttin’ than Bananarama and, of course, the Spice Girls, harder hitting than cheerleader Toni Basil’s giddy one hit wonder “Mickey,” but not as tauntingly libidinous as early Bangles, the Pipettes energize the future while looking towards the past. They may re-imagine Phil Spector’s dynamic echoplexed creations on lascivious “Be My Baby” homage, “Sex,” and spaghetti Western-tinged “Tell Me What You Want,” a truly mesmerizing’70s Philly soul cop grooving to the Delfonics, but their snippy lyrical conceits maintain a chic mod elan.

Before accusing the Pipette gals of being mere eye candy, be aware that the hooky songs delivered are constructed proportionately with backup crew, the Cassettes, in egalitarian fashion.

“It’s a very utilitarian process of seven people,” affirms Rosay. “One person may come to rehearsal with words or chords. We jam around to see what fits, have our own in-house editing team, and try to be as open as possible shifting things around and have gotten better as a band because our confidence is growing. Anyone who gives a song to the band knows it’s owned by all of us. It’s important to have a shared voice.”

Rosay’s broad range of influences extends from folk singer-songwriters Joni Mitchell, Tim Buckley, and John Martyn to the Beatles and Stones. Her mom, a Motown-reggae fan, bought Rosay a piano at age seven. She was initially attracted to the Pipettes autonomous nature.

“We were formed for a concept. That’s the bands’ foundation,” she says. “We all care for each other and fight like siblings. What’s great is there’s no individual egos. It’s about working towards fulfilling an idea and not worrying who’s gonna sing lead more or be a front person in pictures. That’s what attracted us to the band, especially when Gwenn joined. That was already set in stone. It’s quite a liberating experience.”

The Pipettes emancipated front women exist on their own terms, verifying feministic redemption through music.

“We’re not trying to be righteous. We’re reflecting what young girls feel about things and the lyrics are quite conversational,” Rosay explains. “That’s perhaps inherently political. We made a careful decision not to have three girls play instruments onstage, raising the question of what value people put on women in bands. We’re constantly undermined because we don’t have guitars strapped around our necks so how could we be musicians. They think there’s a male Svengali behind it all and we’re just silly girls dancing in dresses and surely don’t write songs. Everything we do is very deliberate, comfortable, and natural.”

Furthermore, she deems, “There’s a horrible trend where girls have to play harder and faster than boys to validate their position. That’s bullshit. Just do it exactly as you want. Let’s celebrate being feminine. I wear a dress onstage because I like to. It’s not that I want you to fancy me or I want to fuck you. Fact is it’s a male dominated industry. It’s important women know how far they’ve come in music and shouldn’t be stopped from doing what they want.”

Unfortunately, the Pipettes were devastated when British staple, Top of the Pops, came to an end recently. Along with former tour mates, the Go! Team, another fledgling pep-rallied coed Brighton-based clan, the demise of television-related programs showcasing seductively charismatic performers hurts their chances of superstardom, negating the full impact of zestful videos such as the one done for “Pull Shapes,” where the footloose Pipettes bash a square’s banquet.

Rosay believes the entire enterprise is overrun by boys with guitars, lowering the potential for talented starlets to receive larger exposure. Still, prime time outlets for pop performers of all stripes have been on the wane since vibrant ‘60s pillars Hullabaloo, Where The Action Is, Ready Steay Go! and Shindig went bye-bye.

She clarifies, “I reckon the entire industry needs a resurgence. We’re really into performance and want our shows to be as exciting as possible for our fans. We want our audience to dance. We can’t convince them to dance if we’re just standing there. We’re not interested in looking cool or posing. We made up these dance routines. Gwenn and Becky had dance training, but it’s all meant to be simple, interpretive, engaging, and physical with the music we’re making. After a song’s complete, we’ll dance around in our living rooms and if it makes us laugh, we usually keep it.”

“Brighton’s open to ideas and has venues who’ll put you on. There’s not a particular scene. It’s just very eclectic. Certain sensibilities run parallel. People, luckily, responded to us,” Rosay assents. “There’s actually a campy cabaret tradition there which fits in well with our slightly tacky act.”