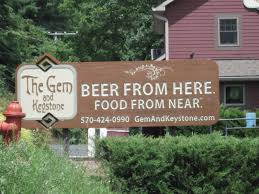 So I left the three kids at home alone, jumped in the car with my wife, Karen, and headed west to the Pocono Mountains and beyond for a two-day excursion on Good Friday, April ’11. Our trip began at Shawnee-On-Delaware’s bucolic Gem & Keystone Restaurant, a maroon three-story Colonial edifice perfectly in tune with the surrounding wooded countryside. Located at the Shawnee Inn & Gold Resort alongside a rolling stream in easternmost part of the Poconos, this fabulous eatery served beers crafted at SHAWNEE CRAFT BREWERY by Leo Bongiorno. As if to prove winter still had one last breath, I spotted a few leftover snowflakes before entering.

Upon my May 2012 lunchtime revisit, I sat at the downstairs bar in the light green-walled Lower Level Tavern getting drinks from bartender Nicole Chinnici. Hand-carved wood furnishings decorated the exquisite mahogany bar while five tables, several TV’s and a billiard table filled out the room. I consumed three previously untried beers during the one-hour stay.