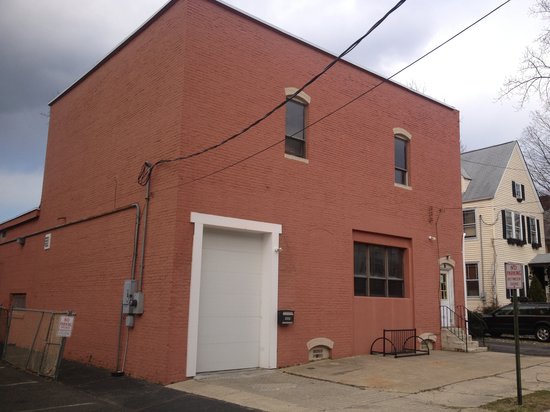 CARTON BREWING STORMS OUT OF THE GATE

Two investigative white-collar relatives and a respected musician friend with a crappy home brew kit yearned to create the beer of their dreams. Soon, the triumphant triumvirate would perfect a session beer that’d be the calling card for their ambitious new project. Run by Augie Carton (a stockbroker), his cousin Chris Carton (a Newark defense attorney), and Jesse Ferguson (famed Def Jux producer), Carton Brewery opened its doors, August 2011.

Just a block away from the largest eastern seaboard marina at Sandy Hook (inside an unassuming lavender domicile), Atlantic Highlands’ upstart Carton Brewery shocked local Jersey competitors by winning the People’s Choice Award at the First Annual Asbury Beer Fest. Utilizing a 5,000 square foot, 2-storey structure built circa 1890 to house Methodist summer tents, the newly wood-floored space was adapted to a legitimate brewery after a year of preparation.

While Chris Carton admittedly admired the beer crafting skills of local Red Bank celebrity Gretchen Schmidhausler (formerly of Basil T’s), Augie’s been genuinely impressed by New York brewers Southern Tier and California’s Firestone Walker. Amongst Carton Brewery’s pristine first floor equipment is a sterling stainless steel baby fermenter used during early experimental phases. Holding 20 gallons of beer, this virtual ‘flavor finder’ allows for four separate five gallon batches to be created to find out which hop variety or yeast strain works better for each individual recipe. A Red Rye is being readied for the larger tanks as we speak. And last weekend, the Carton’s made a pilsner-styled beer with blue agave syrup.

“We’re high hop guys,” Augie insists. “The red rye is our comfort beer. Whatever hop we want to play with we jam into the recipe and see how it’s gonna come out. We may fool around with four different yeast strains the first time we do a wildcard brew. Then we’ll settle on one yeast for the full 20-gallon fermenter.”

“The job of any session beer is to taste good cold and clear up a thirst,” Augie opines as angry Irish fiddle music plays in the background and the sun gleams through two skylights. “When you’re no longer gunning them down and you need the beer to warm up a bit – unlike macrobrewed lagers that go to hell at 40 degrees – we want Boat to stay interesting. As it warms, citric fruits turn to white stone fruits – peach, pear, apricot. What starts off super-piney becomes more mossy and chill and evolves. We chose Kolsch yeast because it stays out of the way of the iron-rich salty brined Jersey mineral water.”

“We focus on harmony between bitterness and sugaring playing to our water source,” Augie shares as the all-important Saturday tasting crowd arrives. “We’re anti-type, but 077XX’s an India Pale Ale. It has a saltier eastern watering we’re not hiding or correcting except to take chlorine out with a carbon filter. There’s super-American floral tropical hops.”

Though he’s not with the Carton’s today, partner Jesse Ferguson grew up in Fort Collins, Colorado, moved to New York to run the dopest indie hip-hop label (Def Jux), then married Augie’s wife’s best friend. Practicing zymurgy was initially difficult for the apprenticing Carton-Ferguson connection, but the curious trio just wouldn’t give up.

“Jesse was a super-helpful cool cat I gave a homebrewer kit to as a thank you present and he went ahead and brewed a terrible beer,” Augie laughs as we dip into headily approachable Carton BDG, a nut-charred, black-peppered, coffee-roasted dry body evoking French bread crust. “He started making better beers and Chris and I were drinking a lot. If we could get Russian River’s Pliney The Elder, we’d drink it as a session beer. So Jesse attempted to make a session beer. After five attempts, we were getting closer to what we truly wanted. We sent Jesse off on a year of internships to Georgia’s Terrapin Brewery and Kelso in Brooklyn.”

For mid-afternoon dessert, I try the pilot version of an unsweetened session stout exhibiting acridly swampy earthen soiling and chocolate-soured coffee oiling. According to Chris, it’s the world’s only dried milk stout. A finalized version will be available in January 2012.

“Ultimately, our plan was to expand beyond kegs,” Augie says. “We want to stay this size until we could bottle or can our own beer instead of using a contract brewer. As beach bums, we don’t necessarily want to bottle because boaters handle cans easier. Drinkability is a priority.”

Augie then elucidates about ‘loving the provocative interplay between beer, wine and food.’ Before long, the loquacious host displays a solid appreciation for ‘the difference certain hop spices and yeast batches make upon discovery.’

He concludes, “Last time we were here, 381 sold-out our Pumpkin Cream Ale in 30 minutes. So we thought we’d bring up something special again.”

During a March 2012 stopover, got to try a few new Carton beverages alongside the wife. While conversing with Carton brewmaster, Jesse Ferguson, at the first floor brewing area, he pours me a just-finished version of his latest concoction, Red Rye Returning. Served right from the tank, its caressing brown-sugared chocolate malting and dainty fig-sugared dalliance sit atop a serene peat-y rye base tingled by mild Simcoe hop bittering.

As we get set to leave, I meet Dan Hitchcock, a young brewer whose Rushing Duck Brewing is due to open June ’12 in Chester, New York. The former Weyerbacher brewer (and American Brewers Guild grad) promises year-rounds such as Coffee Porter, Strong Ale and West Coast Pale Ale.