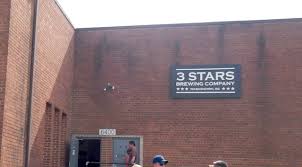 A bulb-lit 3 Stars insignia above the blackboard beer list captures patrons’ attention nearly as much as the onsite brews. Antique chandeliers and exposed pipes hang from the wood ceiling and a large red and white stars and stripes banner occupies a side wall. A kiosk-like country-styled Urban Farmhouse gets utilized mainly for private parties.